​In the ocean, iron (Fe) is an important micronutrient for phytoplankton growth. Phytoplankton play a vital role in the global carbon (C) cycle, accounting for 50% of the total photosynthesis on the planet. When they die, phytoplankton sink and can become buried in the sediments of the deep ocean, removing C from the atmosphere and surface water. While Fe is an abundant element overall in the Earth’s crust, it is extremely diluted in the surface ocean. These Fe-poor surface waters limit phytoplankton growth and their ability to remove C from the atmosphere and surface ocean, especially in areas such as the Southern Ocean where macronutrients are high but surface Fe remains low. These areas are called high nutrient low chlorophyll regions (HNLC), and have the potential to support much more phytoplankton growth if new Fe was available in surface waters. Hydrothermal vents have become a highly debated potential source of new Fe to the surface waters of the Southern Ocean. Previously, it was thought that Fe was precipitated in close proximity to the vent field, due to the high scavenging potential of Fe and the chemistry in the buoyant hydrothermal plume. However, recent geochemical models coupled to in-situ data have indicated a large hydrothermal Fe source in the Southern Pacific Ocean along the East Pacific Rise (EPR) that, if capable of long-range transport, can eventually be upwelled to Southern Ocean surface waters and fuel phytoplankton primary production. Previous studies have hypothesized that two mechanisms, nanoparticles and organic complexation, are likely responsible for transport of hydrothermal Fe over long distances. Yet, this mechanism has not been confirmed. Therefore, hydrothermal fluids could be an unrecognized nutrient source to the surface ocean, and play a critical role in global C cycling. The study will focus on identifying the chemical speciation and the mechanism for the long-range transport of hydrothermal Fe, therefore transforming our paradigm about mid-ocean ridge biogeochemistry. 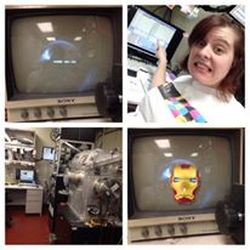 ​Iron (Fe) is a vital micronutrient to support life in the ocean. Investigating the bioavailability and transport mechanisms of Fe away from the vent axis could aid in understanding the impact of the hydrothermal Fe on life in the deep ocean.  As part of the 2013 U.S. GEOTRACES-EPZT cruise, samples were collected along a ~8000 km transect, that includes a 4357 km stretch of hydrothermally influenced waters and sediments.  The goal of this study is to investigate how iron (Fe) is protected from sedimentation oxidation processes and transported by marine hydrothermal plumes.  I will examine the Fe and carbon speciation at the Scanning Transmission X-ray Microscope (STXM) and X-ray Microprobe at the Advance Light Source in Berkeley, CA.  In addition, minerology, Fe flux to the seafloor, and enzyme activity will also be investigated.

See here for publications linked to this project. 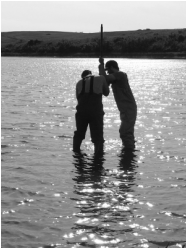 ​Mineral surface properties, including surface area, are considered one of the largest factors in preservation/burial of organic carbon (OC) in both marine and terrestrial sediments.  Microorganisms access these OC reserves by producing extracellular (exo) enzymes to gain selective advantage within their specific environment.  Exo-enzyme activity is thought to be a critical aspect of global cycling in terrestrial, freshwater, and marine systems.  However, incorporation of exo-enzymes into global biogeochemical models is currently limited by several issues including limited understanding of the impact of sorption to mineral surfaces and a lack of data for marine sediments.  My goal is to address these two problems by understanding the impacts that sample storage have on the minerology-exo enzyme relationship.
Understand Fungi and mineral relationships, 2016-2017

The goal of this study was to culture different fungi isolates (mainly from Soudan Mine) and understand their response to certain metals.

Identification of a new bacteria species isolate from the ocean crust, 2012-2013

​The goal of this study was characterize Bacillus rigiliprofundis, a recent microorganism isolated from deep subseafloor basaltic crust.  We measure its ideal growth temperature, %NaCl, and pH.  Additionally, I was responsible for investigating siderophore production in Bacillus rigiliprofundis and three closely related Bacillus spps.  These research results are described in more detail in the publication listed here.
Searching for life in the deep biosphere: sequencing crustal rocks collected in the North Atlantic, 2012-2013

​Seventy percent of microbial life on earth is thought to exist below the ocean floor (deep sediments and ocean crust).  In order to study these microorganisms, rock samples from North Pond (IODP Expedition 336), a sediment “pond” with basaltic basement, were extracted and sequenced.  A community analysis was then complied and examine based on potential geochemical resources available in the surrounding rock and pore water.
Discovery and Identification of Fungi in the deep ocean sediments, 2012-2013

​Fungi was recently isolate from sediments from the South Pacific Gyre (SPG) IODP Expedition 329.  Fungi has not traditionally be considered a viable ecosystem in the nutrient poor SPG deep marine sediments.  Current models tend to only include bacteria and archaea ecosystems within these deep marine sediments.  The objective was to characterize fungi isolated from deep marine sediments collected from the SPG.  Thus, providing a deeper understanding of the deep subsurface biome and utilization of nutrients within deep marine sediments at SPG.
All photos are the property of Colleen L. Hoffman, unless otherwise noted.
The views and opinions on this page are those of the author.  All rights reserved.
Powered by